Wang Lijun is one of the most high-profile law enforcement officials in China, in part because he was hand-picked and promoted by Bo Xilai, the Governor of Liaoning, a dark-horse contender for the Politburo Standing Committee of the Chinese Communist Party, and potentially a candidate for the very highest level of political leadership in China. Wang worked for 29 universities and research institutions with such titles ranging from part-time professor to chairman,1 and has been responsible for many medical innovations.2 3

In May 2003, Bo Xilai transferred Wang Lijun to Jinzhou as police commissioner. Wang does not have a medical background, but soon after he took up the position, he established an “On-Site Psychological Research Center” located under the Jinzhou Public Security Bureau.

On September 17, 2006, in his acceptance speech for an award of two million RMB for the “Guanghua Innovation Special Contribution Award,” Wang stated that “our scientific and technological achievements in the field are the crystallization of the thousands of intensive on-site tests and the efforts of many of our people … to those who have served in the police force for many years, when we see a person go to the place of execution and in a matter of minutes this person’s life is transformed and extended into the lives of other people, it is soul-stirring. This is a momentous undertaking.”4

Ren Jinyang, Secretary-General of the Guanghua Foundation, further remarked, “Professor Wang Lijun and the research center carried out basic research and clinical experiments to solve the problem of a recipient’s body rejecting the extracted organs for transplant after lethal injections. They researched and developed a brand new protective solution, which is used to provide a perfusion treatment for livers and kidneys both in vivo and in vitro. Through animal experiments, in vitro experiments, and clinical application, they have made step-by-step scientific success in making it possible for an organ to be accepted by the recipient after lethal injections.”5

In June 2005, Liao Shen Evening News reported an example of Wang’s work, “the entire process of lethal injections in death-row prisoners,” which was intended to help more people understand the research.8 At 5:00 am on June 9, 2005, in Cuijiatun in the Jinzhou City Economic and Technological Development Zone, a field experiment and study was carried out with a lethal injection. A researcher gave the following introduction.

“Through the entire process of a convict’s death via lethal injection, the healthy person’s vital signs will be measured before and after the injection, the amount of poison residue in various organs afterwards, the prisoner’s psychological changes when facing death … this data will provide important help to organ transplantation after death by lethal injection and other aspects of human organ transplantation. Whether in China or abroad, this is cutting-edge research.”

The reporter described the experts gathered at the execution site as if they were staff of a research laboratory. The reporter referred to Wang Lijun as the director of the Psychological Research Center. The reporter also listed professor and doctoral advisor Xi Huanjiu, the dean of Jinzhou Medical College, and other experts in medicine, criminal investigation, and psychology. They were described as conducting psychological analyses and clinical research on reportedly violent criminals who received the lethal injections.

According to the Chinese Ministry of Commerce website, “Jinzhou Public Security Bureau’s On-Site Psychological Research Center” works with over ten universities and medical institutions, among which are the China Criminal Police College, Peking University, Beijing Institute of Technology, Northeastern University of Finance and Economics, China Medical University, Jinzhou Medical School and the People’s Liberation Army Military Hospital No. 205. It is dedicated to live psychological research and techniques. It also collaborated with universities in more than ten countries in joint research and academic exchanges, including the United States, Japan, Italy, Norway, and Sweden.9

Wang Lijun also presided over a major project on atraumatic dissection in the Asia-Pacific region.10 As shown in the center’s introduction, above, institutions that took part in this project included the Swiss Virtual Dissection Foundation, the Tribunal Science Institute of University of Bern in Switzerland, Medical University of Graz in Austria, China Medical University, Jinzhou Medical College, and the People’s Liberation Army Hospital No. 205.

Between 2003 and 2008, Wang Lijun carried out thousands of what were effectively live human experiments. This raises questions both as to how Jinzhou, a third-tier city, had thousands of death-row prisoners available for these experiments, and whether the prisoners were actually conventional death row convicts.

Wang Lijun was transferred to Chongqing City in June 2008, where he served as deputy mayor and police commissioner. During this period, he established the On-Site Psychology Research Center at Southwest University and acted as its director, professor, and doctoral advisor. He continuously intensified the study on atraumatic dissection.11 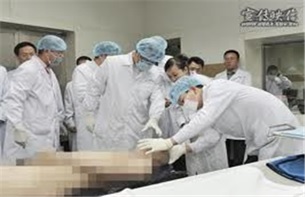 On August 27, 2014, Beijing Youth Daily reported that Wang Lijun had been awarded 254 patents in his office in Chongqing, 211 of which were submitted in 2011, an average of one application every 1.7 days. The report also mentioned a high-tech product called the “Primary Brain Stem Injury Impact Apparatus.”12

The patent’s inventors were Wang Lijun and the fourth laboratory of the Field Research Institute of Surgery in Daping Hospital, affiliated with the Third Military Medical University. They published a paper in Trauma Surgery in 2008 Issue 2, entitled “Finite Element Simulation and its Clinical Significance of Traumatic Brain Injury Caused by Temporal Impact in the Quasistatic State.”13

The paper referred to a software simulation in which this process would be explored, to provide data for real-world scenarios. The paper also set out an experiment, stating that until October 2007, twelve corpse heads were used for the impact tests. All the subjects for the experiments were male, age 26-38, and with an average age of 31.

However, the overall purpose of the study seems contrary to its claim of saving lives. Instead, it studies injuries to the brain at different levels resulting from violent impacts to the primary brain stem. Victims are left with various levels of cognitive and sensory motor dysfunctions, which can lead to life threatening respiratory and circulatory malfunctions.14 Therefore, this process could be used to determine how best to kill. An impact to the temple that is placed just right can cause brain stem injury, loss of consciousness, and even brain death. The heart is still beating, and various organs and tissues continue to live. This impact is an effective alternative to lethal injection while maintaining organ function and reducing rejection responses.

In the China Patent Search System, we can find the “primary brain stem injury impact apparatus”15 under patent number 201120542042X as pictured below. The inventors are Wang Lijun and the authors of the paper describing the impact experiments on 12 corpse heads. The instructions also claim that the device has a “simple structure, is easy to produce, and adapted to promote the application.”

The protection of utility model patents is ten years from the filing date in China. It is odd that this patent application was submitted on December 11, 2011 and published in August 2012, but its current legal status shows that the patent was terminated in February 2016.